One of the most frequent questions we are asked is to clarify the NEMA rating system for enclosures.  There are many misconceptions about the ratings including that a higher number rating means a greater  level of protection or that all ratings suggest that the products are waterproof or dustproof.  For today’s blog, I am going to focus on two of the outdoor ratings and describe what they mean, how they are tested and what the difference are.  These are the NEMA 3 and NEMA 4 ratings which are often confused but mean very different levels of protection. 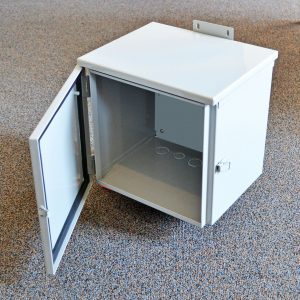 Generally, NEMA 3 means the enclosure is weather-resistant. It protects the components against falling dirt and windblown dust, against weather hazards such as rain, sleet and snow, and is undamaged by the formation of ice.  It also provides the same protection as a NEMA 1 enclosure which means that the interior cannot be accessed from the exterior with fingers or other similar objects.  There are several tests that are performed to certify the ratings.

Just when you thought you understood NEMA 3, they toss in some variables.  NEMA 3R means that the product does not have to meet the dust standards and so has not passed the dust test.  It may not have a dust gasket included although this may be required to avoid the ingress of rain.  NEMA 3S means that the product can operate even when the box is “laden with ice”.  The test for this is typically performed on a finished product, not on the enclosure alone.    The addition of the suffix “x” means that the product has corrosion protection.   A 3x rated enclosure would be used near salt water, for example.

The PN Series is a plastic NEMA 4X rated enclosure

NEMA 4 enclosures are also required to be weather resistant but have more stringent requirements compared to a NEMA 3 Enclosure.  It is also able to be used outdoors thus materials must be able to withstand the outdoor UV levels without degrading.  The testing for NEMA 4 consists of spraying the enclosure with at least 65 GPM of water from a 1 inch nozzle hose from a distance of not less than 10 feet for 5 minutes.  No water can penetrate the box.  There is one subgroup in the NEMA 4 rating system which is NEMA 4x.  This is the same as on the NEMA 3x ratings and means that it can withstand corrosion.

WHAT IS THE MAJOR DIFFERENCES BETWEEN NEMA 3 AND NEMA 4 ENCLOSURE RATINGS?

A NEMA 4 rated enclosure generally provides a higher level of protection than does a NEMA 3 enclosure.  As we noted, the spray test for the NEMA 4 enclosure is much more stringent and suggests different types of applications.  A NEMA 4 enclosure can be used in applications located outdoors where weather is a factor, but also when the product may need to be hosed down.  A good example of this would be in the food industry, medical industry, and other situations where extensive cleaning would be required.  A NEMA 3 box is used in more moderate locations such as in construction, transportation, or even on docks.  The one advantage of a NEMA 3 box is that it is tested to withstand the formation of ice which a NEMA 4 box might do but is not so required.

WHAT IF YOU HAVE MORE QUESTIONS?

Check out our NEMA/IP Rating Guide.

Bud offers a wide range of NEMA 3 and 4 rated enclosures and has a strong technical staff to help you insure that you select the best possible enclosure to meet both your protection and price objectives.  Bud also can modify its enclosures to make sure that you can readily prepare for the installation of your components without compromising your desired ratings.  Reach out to us through your favorite Bud distributor or directly at 440-946-3200, via chat at www.budind.com, or email at saleswest@budind.com.