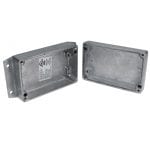 Not so long ago, if an engineer needed a NEMA rated enclosure here in the US, their first choice was a sheet metal box.  Long the US standard, they were valued for their ability to be readily modified, ease of manufacture in many of the steel manufacturing facilities here in the US, and general versatility.  The problem is that they are both expensive and heavy.  Then, as electronics shrank in size and grew exponentially in applications, plastics became much more popular.  Long the established approach in Europe and Asia, they offer a light weight solution that avoids many of the challenges of steel include damaged finishes that can allow for rust and degradation of protection.  Plastic provides natural corrosion protection but has challenges with impact resistance and the ability to readily adjust sizes or configurations.   While the piece price is relatively low, the cost of developing a new mold and getting it approved by UL can be both astronomical.   A great solution with some of the best features of both is a die cast aluminum NEMA enclosure.

WHY USE A DIE CAST NEMA/IP RATED ENCLOSURE?

A die cast aluminum box is typically made from ADC-12 alloy.  This alloy has excellent thermal conductivity, electrical conductivity and is relatively easy to cut.  It fills the mold well and has relatively low shrinkage.  It is low density (thus light weight) yet is very strong.  It provides good corrosion and oxidation resistance.  It works normally at both high and low temperatures and can be used effectively both in and outdoors with complete UV protection.  When molded into a NEMA or IP rated enclosure, it has even greater strength than sheet metal yet is light weight enough to be comfortably used in hand held applications, often the realm of plastic boxes.  Unlike sheet metal enclosures, it does not need to be welded eliminating the risk of bad welds in developing leakage.  It can be easily coated in any color to match the marketing team’s view of the end product.  And, most of all, they are priced much lower than traditional sheet metal.

WHAT ARE THE EXTRA ADVANTAGES INCLUDED IN MANY DIE CAST ENCLOSURES

There are other application advantages to a NEMA/IP rated die cast box.  Mounting bosses can be molded into the dies as can board slots.  The same is true for machine or wall mounting brackets which can be included as a great feature.  By using external brackets there is no need to drill through the box for mounting, reducing the chances of compromising its rating.   Given their light weight, there is limited need for reinforcements unless the internal components are heavy.  Tied into that, there are no concerns about the weight of your components warping the box limiting its ability to maintain a tight seal and its protection levels.  Die cast also provides excellent EMC protection which is one of the challenges for plastics.

Bud offers a number of die cast box series that are rated either NEMA 4x or 6P as well as IP65 and IP67:

Bud also offers several series of non-rated die cast enclosures for those designers who desire the strength and flexibility of a die cast box without the need for them to be used in a hazardous environment.  For more details, please don’t hesitate to reach out to Bud at the contact information provided below or on chat.