The Mysteries of IP65, IP66, and IP67 Rated Enclosures Explained 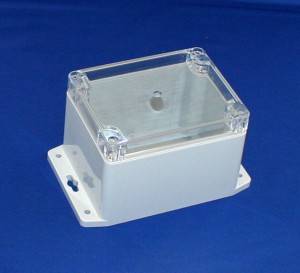 It is often confusing for an engineer to know what type of IP Rating they need to look for when they desire to have a “waterproof” enclosure.  Much like with watches or other sensitive information, there is a big difference between waterproof, water-resistant, and other descriptive but not specific labels.  To help out, there are several rating systems that have been developed and several testing agencies that verify the results. Among these, the two best known are NEMA and IP. This article will deal only with the IP system.

What is an IP Rating?

An IP Rating (Ingress Protection Rating) is the rating used to classify the different levels of sealing effectiveness provided by an electrical enclosure against foreign bodies such as objects, water, dirt, etc.

For enclosures, the typical waterproof IP ratings are IP67, IP66, and IP65 enclosures.  The chart below gives the specifics of what these ratings mean and how they are measured.

IP ratings, or ingress protection, were developed by the IEC (International Electrotechnical Commission) and are most heavily used in Europe and Asia, with some adherents in North America as well.  Since these are international standards, the testing is often certified by the TUV instead of UL, although both provide stringent testing.  One area to note is that while these are developed to deal with harsh environments, they do not address UV protection standards (outdoor) and the engineer should look for or ask about the ability of the enclosure to include UV protection materials.

The IEC isn’t the only standards-making body, of course. NEMA is the National Electrical Manufacturers Association. Its protection ratings are the North American version of IP ratings. For example, NEMA 3 is roughly equivalent to IP45, and NEMA 4 is roughly equivalent to IP66. The standards are similar, but they don’t match up exactly, because the test requirements are different. If your design will be used in North America, then NEMA ratings will do just fine, and they may even be requested by the end customer. In another blog post, “Rating NEMA boxes versus IP boxes,” I discuss NEMA ratings and how they relate to the IP standard.

IP Ratings for Types of Enclosures and Uses

In applying IP protection ratings to a particular application, the design engineer must consider the end-use environment. The examples below offer guidance in selecting an enclosure with the ideal rating.

Small plastic boxes installed on buildings and light poles and used to house electronics for access control, video surveillance systems, alarms, and wi-fi systems. IP66 is a typical rating for this applications, as with Bud’s HD Series plastic box.

Enclosures used to house electrical equipment outdoors should have at least an IP65 rating, like the Bud NF Series fiberglass enclosure.

Die-cast aluminum boxes, plastic boxes, and fiberglass boxes that house controls for equipment incorporated into agricultural equipment. As farming continues to go high-tech, more electronics are being added. An enclosure on an irrigation system, for example, may be specified at IP67 or IP68 (for temporary submersion in water.) The PTQ Series fiberglass box  and the AN-A aluminum enclosure are good examples.

Die-cast aluminum boxes used to house control components in solar and other renewable energy applications. Typically, the choice is an IP67 enclosure like the IPS Series aluminum enclosure.

Heavy-duty plastic boxes and powder-coated die-cast aluminum boxes are widely used in marine applications. These settings include ports, docks, marinas, and ships. Choose enclosures having a IP68 rating, such as the DPH Series.

Any enclosure (made of plastic, fiberglass, aluminum, or steel) used to house automation components and controls on the factory floor. IP65 is usually preferred because that rating will protect from washdown and the designer cannot predict the end-use location. A good example is the Bud NBB Series.

Electrical Cabinets and Junction Boxes that house electrical equipment indoors are usually specified to IP65, such as the SN Series steel box, although an IP45 rating is probably all that is needed if there will be no washdowns. If electronics are going to be installed inside the enclosure, then these may be housed in IP66 enclosures, which are sealed against dust and moisture. This includes DIN-rail mounting enclosures like the DMX Series.

These examples are only the most common applications and again, do not address the levels of UV protection for outdoor applications Often we are surprised at the places where Bud enclosures end up, from stadiums to the space program. If you are unsure about the best IP rating for your application, talk with a Bud sales consultant.